Fall fell: so that's it for the leaf poetry:
some flurries have whitened the edges of roads

and lawns: time for that, the snow stuff: &
turkeys and old St. Nick: where am I going to

find something to write about I haven't already
written away: I will have to stop short, look

figure colors and outlines, given forms, say
mailboxes, or should I try to plumb what is

behind what and what behind that, deep down
where the surface has lost its semblance: or

should I think personally, such as this week
seems to have been crafted in hell: what: is

something going on: something besides this
diddledeediddle everyday matter-of-fact: I

could draw up an ancient memory that would
wipe this whole presence away: or I could fill

out my dreams with high syntheses turned into
concrete visionary forms: Lucre could lust

for Luster: bad angels could roar out of perdition
and kill the AIDS vaccine not quite

perfected yet: the gods could get down on
each other; the big gods could fly in from

nebulae unknown: but I'm only me: I have 4
interests--money, poetry, sex, death: I guess 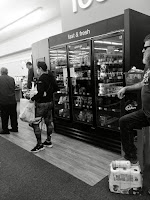 Since I've raged and ranted more than once around here about how there should be no more poems about poetry, I thought why I liked "Called into Play" and not the work of other writers. Attitude is the difference, I guess. My basic gripe is against those who regard poetry as a vehicle of relentless self-revelation, the sub-Nerudians and faux Rilkeans who seemed to have skipped the other qualities their inspiring source's poetry had and instead are determined to make a cult from the practice; the poet- as -priest is not an image that appeals to me and even the most supreme of egoist geniuses, Walt Whitman, would likely find the conceit a bit vain. I don't include the Language Poets, as someone had asked me, even though the poetic language is at the forefront of their work; the effort there, I think, is an honest and exciting investigation into new ways of thinking about how language can be written to more creatively engage the complexity of experience. Ammons, of course, is much less formal and has the aura of someone just risen from bed and is trying to get the sleep from his eyes. What he sees is the same old things, only completely different, to paraphrase comedian Steve Wright.

Ammons demystifies the subject by simply talking about the search for something to write about. Often it's the case that he doesn't latch on to a topic to use his techniques upon, but with much subtly manipulated writing that at first seems plain and idiomatic, his writing turns into inquiries about being in the world with the senses absorbing the raw and restless data and creating a modicum of coherence within frameworks. Whether the room he's in, a conversation he's having, a recollection that becomes overwhelming if temporary obsession, Ammons writes a poetry that never relinquishes its commitment to the material world and the struggle to remain sane and resilient within its demands. This a metaphysics that William Carlos Williams would have appreciated, the idea that the thing itself is its own adequate symbol What he mentions here, things like lawns, mail, current events, are brought up as things he might impress into the details and subject of a poem he wants to write. He might have been talking about a mad search for missing car keys; there's humanity in this momentary frustration. There's the suggestion that Ammons is tired of his old turns of phrase and wants to forge new ones:

...should I try to plumb what is

behind what and what behind that, deep down
where the surface has lost its semblance: or

should I think personally, such as this week
seems to have been crafted in hell: what: is

something going on: something besides this
diddledeediddle everyday matter-of-fact: I

could draw up an ancient memory that would
Wipe this whole presence away...

Ammons admits his limits as a seer or oracle and speaks of language as something he works with through the craft of poetry, a practice he works at diligently to find an expression that transcends mere competence and achieves an artfulness. The poem is funny and moving in its way, as Ammons' work is constantly aware of death, which makes philosophical certainty a cluster of moot points. This all puts A.R.Ammons' musings on poetry in sharp contrast to a host of others who'll essay forth in verse about poets being the intermediaries of Truths and Principles only a select few can design and decipher for the less gifted. Without repeating my previous misgivings, I'll say that this is his Hogwash and Elitism, and these are the sorts of people I imagine Ammons himself asking to go away.

DOO-WOP
Marvin Bell
He believes the tar pits hold bones but preserve
No emotions, and he believes space is matter.
He still thinks a kiss with full lips transformative,
the hope of a country boy with an uncultivated
heart, from the era of doo-wop and secret sex,
when the music was corny, cliched, and desperate
Like teenage love. Who now will admit that poetry
got its start there, in the loneliness that made love
From a song on red wax, from falsetto nonsense.
Who does not know that time passing passes on
Sadness? A splinter of a song lyric triggers shards.
Of memory and knots in his gut. He regrets he was
Lashed to the mast when the sirens called. He
believes the sea is not what sank or what washes
Up. There are nights the moon scares him.


Associative leaps are not the easiest thing to do when so much of what your attempting to get across has more to do with a transitional state of mind than it does a position that can be easily parsed and contained. Marvin Bell is one of those poets who can offer a string of nonsequiturs and still having you following the heart under the odd contrasts in his lines. Unlike Tony Hoagland's poem, "The Story of the Father" (featured at Slate last week), where what should have been seen from a longer prose narrative got compressed beyond human caring with mannered, showy language, Bell has the ease of line transition, the ability to jump from one nervy island of reference to another and provide a sense of something gathering speed, assuming nuance. The young man going forth into the world of the senses, sparked by music, sirens, scents, and touch; there is a skillfully maintained idea, implied and not editorialized as intruding and ineffective aside, of music as that thing that bypasses the mind's censors and entrenched protections against foolishness and lands and seeds the desire to experience more with the senses, to test one's expectations against experienced fact.

He believes the tar pits hold bones but preserve
No emotions, and he believes space is matter.
He still thinks a kiss with full lips transformative,
the hope of a country boy with an uncultivated
heart, from the era of doo-wop and secret sex,
when the music was corny, cliched, and desperate
Like teenage love.

This is a fast run of language, streaming, quite literally, with all the elements that compose it melded together in a fluidity that rushes towards a crashing and overwhelming satisfaction. Tempo, rhythm, what the hip-hoppers refer to as “flow,” this poem is simply perfect, simply lovely.

By TED BURKE at May 04, 2020
Email ThisBlogThis!Share to TwitterShare to FacebookShare to Pinterest
Labels: A.R.AMMONS, MARVIN BELL