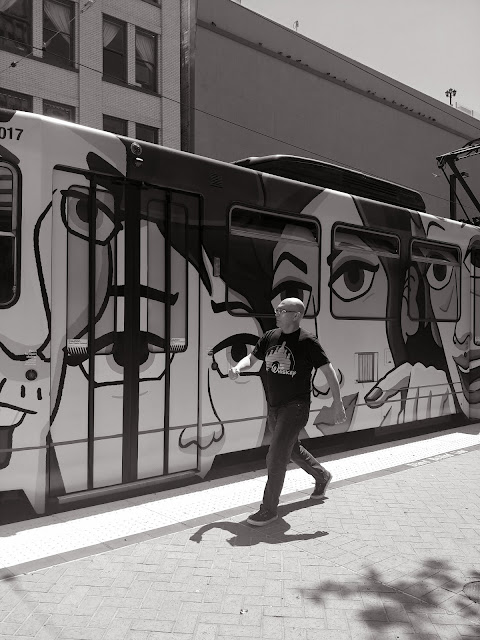 The poem ""If Marriage is a Duel at  10 Paces" by Traci Brimhall is  less a ritualized settling of grudges than it is a supremely phrased and acidly etched sequence of lampooning the hackneyed metaphors that apply to timeless institutionsAbsurd comparisons between marriage and something other. Brimhall seems to draw from a period of having to listen to platitude-dripping testaments from husbands, her own and likely the remarks of other nervous men, who needed reassurances about the stability of the contract with bromides and sage cliches that were a form of emotional blackmail. Brimhall takes up the game and posits her own thinking mimicking the analogies and interrogating the logic; every statement contains it own contradiction and counterargument."

"If marriage is a war for independence, I’ll find a feather
for my cap and shoot you from your horse. Darling.
If it’s a hunt, salt and cure me. If it’s a plague for two,
my dear, let’s quarantine ourselves in the cemetery wearing
aprons and snakeskin belts. Let’s disfigure each other
with praise. My beautiful. My fugitive...

There is a tangible anger at the entire "'til-death-us-part" solemnity of the wedding vow which sets the poet up splendidly for an extended take down of the premise. There is of course, the issue that this only one side of the story and what we lack is a complexity that would make this poem even more dynamic; honestly, that does not bother so much if because Brimhall gets the tone and the poking-finger earnestness of the stream right. The story that happens offstage, that is unmentioned during this narrator's confession of resentment, is palpable, conspicuous by the lack of reference. Anger, frustration, bristling irritation has given the tongue or at least the mind, an articulation it may well not had seen  before.

The strength of this power, its power in fact, is that the poet simulates the verbal dexterity a long brewing dissatisfaction can give you and which comes out in one especially articulate explosion of well-turned sarcasm. Reading this made me think of those times when I had entered someone's living room by invitation only to get the sense that there is a narrative under the subterfuge of polite chatter and mannered hospitality, that at any second the lid might blow off the pressure cooker. This poem is one of those moments when it finally does.


This is a caustic rant and it would be a fitting speech for a character in play the wife, fed up with years of her husband's laziness, stupidity, infidelity financial irresponsible and an on the easiest phrase that comes to mind when justifying his onerous acts, responds at once with bazooka and blow torch. There is the neat, efficient trick of mocking with great exaggeration while revealing the harm cliches, evasions and lies cause, as in "let's disfigure ourselves with praise..." While the truth sets you free by liberating you from falsehoods that coerce you into making terrible decisions, lies mar the landscape, destroy trust, create unhappiness for all those involves, makes it a requirement that one carry equal amounts of dread, self loathing and resentment under a cracking veneer of calm resignation.

Brimhall's poem starts from the point where her narrator seems to have dropped the last dish to the floor, stands straight, hands on hips and begins a thorough dismantling of each lie she in. This is a powerful poem, unusual, punchy and full of a crackling good wit. This is a warning to readers to not flatter their spouses with the foul essence of stale sentiment promises and vague assurances that destiny will be great if you just stay the course. Talk long enough and you will create the verbal rope that will coil around your neck even as you speak the words, or someone speaks them back to you
By TED BURKE at July 06, 2019 No comments:
Email ThisBlogThis!Share to TwitterShare to FacebookShare to Pinterest
Labels: TRACI BRIMHALL

Witnessing the decline and eventual death of a parent is the surest way to send any of us into the deepest well of depression and morbid reflection. Few of us handles it with quite the grace we might have hoped for.  Shock,  grief, guilt, recrimination are only some aspects the lot of us go through when our parents are suddenly, rudely absent in our lives. We try to make sense of it all, of the choices we've made and the things we've done. There is, it seems, no meaning to find behind it all other than the acceptance of the fact the clan is smaller now and that our lives go on.

, a very fine California poet with a sharp sense of the telling detail and lean cadence that conveys underlying emotion and tone, has an engrossing new collection of poems in which we witness her going through the death of her father. The Hospice Bubble and Other Devastating Affirmations.  A sequence of poems of how she cared for her dying father up to the inevitable final day, Wann fearlessly records the days the incidents, many small and painstaking matters as the days wore on, through surgeries, meals, bits and pieces of final conversation, there is a palpable tension in these lines. There’s no need for the Big Language. Wann is too good a poet for gaudy special effects. She lays bare her ambivalence about her father's decline. These poems are not the grand slam and over decorated summation of what one has discovered about themselves at the end of the trial; Wann’s triumph is in her spare, uncluttered impressions. Throughout the poems that comprise the title sequence, Wann writes with the concision of Hemingway and the chiseled elegance of a Lorrie Moore. Lizzie navigates these narrative fragments with a sure foot even as the ground beneath abruptly shifts. There is a strong sense of someone who’s on a new emotional territory, having her wits and resources challenged, tested.  Each poem yielding some small piece of hard-won insight.  It is the ultimate irony. Her father helped come into the world, and now she is helping him leave it. The poet doesn’t rely on the convenience of easy irony. As splendidly recollected in the piece “Winter Solstice 2017”, what she finds isn’t just making his passage comfortable, but finding out how deep her love for him has deepened, the love of a daughter for a father. While in a hospice, her father tells her of a decision he’s made.

on the longest night of the year
my father said he was ready to die
his decision was both shocking & comforting
we had talked on the phone earlier
he
it  other times
sitting beside him in his hospital room
my mom on the other side, he said,
“I’ve .”
I took his hand, his skin soft & thin,
“I want to go home,  with this,”…
he gestured with his other hand to show
hospital, machines, gowns, fluorescence
“I want you to talk to them tomorrow.”

This could seem a cold observation of Wann’s way of writing through these momentous events, but I think it’s a worth mentioning this writer’s efficiency. No casual word- slinger throwing words at a page to see what sticks to the wall, she avoids easy allure of wallowing in her misery. Blessedly,  as well doesn’t of offer unrefined introspection more appropriate for private journals rather than a poetry volume.  Like a fine musician who has learned the art of note choice, she chooses her words wisely. Knowingly or not, she is composing with Ezra Pound’s notion of writing to the rhythm of the musical phrase and not the metronome. This makes her poems powerful and lyric, poetic in ways a reader doesn’t expect. Pound’s fellow poet William Carlos Williams worked for a verbal quality to his poems, as close to Spoken Language as the imagination would allow.  Wann has that in her poems, a rhythm and a flexible emphasis that conveys a mind’s hesitation, the rush of sensation, a sudden flash or sorrow or swift and brief elation. What I’ve always admired about ’s poems is the sense of something bristling under the surface of the written lines, a confession, a fleeting insight, a secret struggling to emerge. “Winter Solstice 2017”, she accounts for speaking with the family, the doctors, conversations matters intimate and private with her father. She returns home finally, still processing the profundity of her father’s request. At end of day, she slips into needed sleep. Wann is at her best her, deeply, lyrically moving beautiful in its elegantly unadorned honesty:

that night, I slept in his bed,

but not before I examined his room,

I ought to emphasize that the 25 poems that make up the title suite of
The Hospice Bubble and Other Devastating Affirmations aren't relentlessly dour or respectively bittersweet in tone. The sequence is not necessarily in order, and have the quality of a mosaic, poems composed as different memories sparked different ideas and moods. Meals, chats, frustrations small and big, the irritations minor and major which stress the limits of one’s willingness to go on, area highlighted in the selected poems. There is a subtle wit that underscores the pilgrimage suggested in this volume’s subtle by the phrase “Devastating Affirmations”; this passage is both curse and blessing, a tragedy that transforms a life with a blunt inevitability, but an event that provides the opportunity for every woman and man to become the adults in their expanded household. Samuel Beckett, the poet laureate of perennial stasis, moaned famously, to paraphrase,… I can’t go on… I’ll go on,” a phrase mimicking the collective grunt of a common man getting out of bed with a conviction that the crushing burden of life on its own terms, the daily grind, is insurmountable and unending: they can’t take it anymore.  And yet man, the woman, showers, shaves, has coffee and leaves the house to battle again, finding, for a moment, the will to engage again. I believe Wann has a more interesting journey; through her efforts to aid her father with his pain and eventual death, she becomes who she is.

Other affirmations, not so devastating,  with in his potent book, those being deaths, depression, writing, love, matters she writes her way through. I sense a writer who picks up the pen to find out what she thinks about the people, places and thinks which continue to make days and nights something less than serene glide. What arises as I read the poems was the faint but pulsing rhythm of hope, not so much the typical glad tidings imprinted on bumper stickers and corporate greeting cards, but a recognition that all this misery, labour, all the toiling in attending to final days and hours of a parent's life is a process of discovery of one's aptitude to navigate personal tragedy's rocky stream. Life continues, one's wits , one's eyes have adjusted to the dark that shrouded their life for a time, and the sun arises again, the wind blows, the air smells sweet.  Wann writes about many small things in a big way, a writer fascinated with being alive in the world.

To  lets consider a short poem, the last piece in the book: