THE ESSENCE OF RICHARD BRAUTIGAN

Concerning words and their effectiveness, too often even the  stingiest of poets  work in earnest to make minor-key efforts seem like treatises about the objects 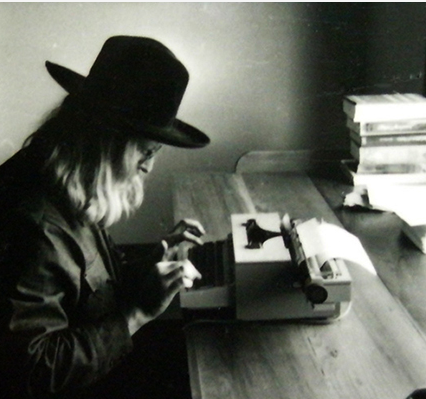 they've chosen to temporarily obsess on. Over writing continues in our lifetime, even  among the most severe gathering of minimalists. A banal, everyday image to open, a bit of conversation, an incidental gesture, a memory that is generated, some arcane reference to a philosophical truism, freshly lifted from a directory of overused quotes, to make the whole thing resonate with the semblance of larger import, and then a return to the image from which the enterprise started, hopefully altered for the way the poet has talked his idea into submission.Even in the concise poems of Billy Collins one can sense an autodidact chomping at the bit to unload the sophisticated reading they've done to invest in such slim prophecies. One senses what was left unsaid, and that makes for an unsatisfying work, compromised between desires. And John Koethe strikes you as a junior league.

Pound, the last guest to leave the party . But not the late Richard Brautigan--too much of a whimsical clown half the time, given to quick sketches and half-bright paragraphs, Brautigan could still pull perceptual beauty from situations where there was nothing going on. At his most sublime , he was the laureate of what wasn't thought through. His intention appeared to be to stop writing before intellection kicked in and larded up what was already a choice, uncluttered perception of what he saw, what he felt, what he thought in the instance of perception. The beauty of his best works , it seems, is that they resemble someone trying to express something small yet extraordinary they've witnessed in a half second, a feeling that swept through them and gave them warmth and solace for a moment and then was gone, the rapid and convulsive giddiness that comes to  one while one is between tasks, locations or conversations , that feeling which brings the high-pitched laugh, although the world to others remains intransigent and  sober as a hard stone. The poems are that man or woman searching for the word, the image, the analogy, grasping at parts of several fast vanishing ideas, resulting in amazing associative leaps, gaps, a poetry that allows the wind to blow through the spaces and rustle the leaves that remained on the metaphorical limb.

Your Catfish Friendby Richard BrautiganIf I were to live my lifein catfish formsin scaffolds of skin and whiskersat the bottom of a pondand you were to come byone eveningwhen the moon was shiningdown into my dark homeand stand there at the edge ofmy affectionand think, "It's beautifulhere by this pond. I wishsomebody loved me,"I'd love you and be your catfishfriend and drive such lonelythoughts from your mindand suddenly you would beat peace,and ask yourself, "I wonderif there are any catfishin this pond? It seems likea perfect place for them."

Richard Brautigan--he is happy to remain slight, a poet who can deliver the payload he has without seeming, at his best, to be serving another poet's muse. Zen, I suppose, is the first thing I think of, a what-if scenario that rather joyfully plays with a Muddy Waters catfish metaphor and transforms a blistered, haggard blues trope into a suddenly wonderfully state of being awestruck. One goes along with this and is impressed with the way the narrator can suppose he were a catfish, imagine the thoughts of the woman he is addressing, and land the final perception in some notion that is unrelated to the teller's implied desire and lust but is linked, entirely appropriate, all of a piece.

"I wonder
if there are any catfish
in this pond? It seems like
a perfect place for them."

This pond, as imagined, is the perfect place for  muses, musers, and musings--a superb bit of half a notion given a full and complete voice. A remarkable thing, this poem.