THE MEMORY FROM BEFORE BIRTH 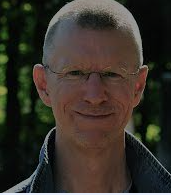 "When in the Uterine Empyrean They Told Me" by Patrick Donnelly is one of the more intriguing poems I've come across in the last couple of years, a recollection of someone trying to bring coherence of things he has heard in the ether, whether words themselves or the sensations that suggest them. There is that feeling that the narrating consciousness is off stage, trying to remember his lines and the marks they're supposed to hit, trying all this time to integrate the warnings, advice, and sensory overload that accumulate as the cue for the narrator's entrance onto the life's stage draws near. Somewhere in his writings(in his story/essay "Eureka," I believe), Poe writes of the "memory from before birth," a metaphysical riff he practiced as he waxed grandiloquent about Aristocracy and their fated superiority in the material world; his idea, if memory serves, is that there are those among us who are born with a knowledge of who we are and what we are to do in the ordering of the dimensions balancing the physical and ethereal plains.

For Poe, this was an attempt to buttress his obsession with decadence and degeneration with a philosophical waxing, and it gives the whole notion that souls about to be born have a whole and lucid set of instructions with them as to their purpose, their manner, their temperament and the talents that will emerge as a result. His theory and his tales and poems are a package deal. Donnelly's poem, though, is decidedly non-determinism in its vision of the pre-life, a terrain not misted but corporeal, fluid, a drift of nutrients and sensations that carry a medley of voices that seem to stream audio of generation-ally expressed family personality. It's a flaky design of the unseen path to this life, but it does make poetic sense considering Poe's conviction that only that which is in the last moments of life, the precise moment before skin goes brittle and breaks, can be truly beautiful.

When in the uterine empyrean they told me
of love, they named it a sickness, fever, impediment
to enlightenment. Some swore it could make you wail
over hills of hell in a long black veil, defenestrate
yourself in a Second Empire gown, or stand
wringing-wet at the intersection with a cup and a sign
reading COMFORT ME WITH APPLES.

"They" are not named. They are faceless. They are without form but are vivid like the kinds of love this family has expressed, experienced, had lost. These are phrases and clipped whispers that might be trying to give warning of what lures will chain you to drudgery and hardship or a promise of what joys and pleasures await that will make the crushing physicality of life worth the struggle. The signals are crossed, confused, and there is pleasure in reading these lines; this is a consciousness that is attempting to come up with a finite picture of what's to come based on bits and pieces that drift boy on the blood flow. But there is clamor, more noise, and what seems to get louder are fewer warnings about what one will materially wed to once they emerge into the hard light. Still, rather grand and anonymous forces will seek to rule one's existence, enforcing a quizzical Will with vague threats:

There were a few, humiliated and exalted, who rose
like comets in yellowy tiers, to sing in Provençal
of the Name, the Name, the same longing Name.
But others warned that whom He loves, He corrects,
of "friendship with benefits," balcony scenes, mad scenes
in all-white restaurants, of the turned back in bed.

It's an argument that's overheard, bickering the yet undelivered is being drawn into even before one gets the chance to master their language or gather experience from which to assert themself as fresh, independent, unsullied. This is the bickering and division of Original Sin, and one is brought into the world suddenly, painfully, protesting and ready for battle. So our soul is already propagandized, seduced, ready for the battle; Donnelly suggests that there is the moment when a choice is given, that one might miscarry them self and defer their emergence or dive, so to speak, right into the rumble and bustle of the messy world that awaits. Our narrator is primed for action and responds to a genetic inevitability:

But when they said I could remain behind
if I chose, like an unlit lamp,
sounding my brass and tinkling my cymbal,
I didn't think, I seized
the bloody flag of my attachments
and tore down the tunnel of what I couldn't know

was my millionth birth.

Donnelly sets up an interesting parallel to Poe's essay and gives us a rich imagining of how our deeds, rationalizations, and best motivations might come to influence generations to come. There is something reminiscent of D.H.Lawrence in this poem in that the novelist had a theory that the best virtues and worst traits of men and women are exchanged through lovemaking and that the qualities or infirmities are passed on "in the blood." It had been suggested that the poem was Donnelly's attempt to write about the tension between being gay and trying to abide by a spiritual doctrine that considers your very being an abomination, but I demur. It's there if you're determined to find it, but it seems a stretch. What I picked up on was the embattled spirit coming through some convulsively argumentative and contradictory loop from which it attempts to make sense of, coming into life already fated to be self-seeking and self-defeating. This, for me, suggests an absent God whose plans have gotten static and stripped of anything like grace or transcendence. The generationally collected consequence of ill will and meanness congests the air, as it were, of the elevated plain. It's an existentialist situation mixed in with a notion of eternal recurrence, reincarnation; Mailer does something similar with his novel Ancient Evenings in which a magic-dabbling Phaero manages to extend his lineage through the ages but grows increasingly distraught that his version of immortality morphs in meaning and uses beyond his grandiose scheme. Homosexuality might well be one thing Donnelly intended for his stew of tensions and bad faith results, but I don't the poem is about the problematic nature of being gay and attempting an authentic, loving life; the narrator's dilemma, I think, is more open-ended than that, and this is where the power of the poem lies for me, in the way the language can be so vivid concrete, and yet remain oblique.

The notions are repellent, sure, and there are grounds aplenty to attack them, but the case here is that Donnelly has taken the overriding idea and made it much less abstract, given us a scenario in an actual voice, and provokes from our sympathy for the newborn who must emerge from the chaos and struggle against the bitterness that has already been foisted upon him,

By TED BURKE at July 06, 2021
Email ThisBlogThis!Share to TwitterShare to FacebookShare to Pinterest
Labels: PAT DONNELLY