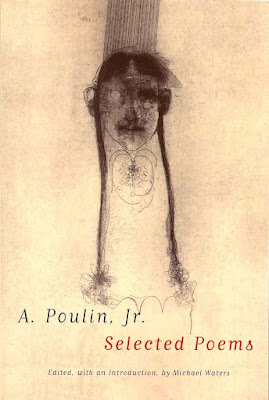 The late Al Poulin Jr., poet and publisher of the esteemed BOA Editions, gave a reading where I worked and struck me as the sort of man who, like, likes to consider the magical elements of the everyday and the mundane world unseen but who hasn't the time for a language that clouds the sensations, not clarify them. It's a fanciful musing to come across, how those sounds you hear only when there is nothing else in motion seem extraordinary and odd; rather than consider the noises as merely the natural sounds a structure makes as its framework shifts or sags due to the demands of gravity and its own weight. Or, in the case of this poem, the knocks and hisses and muted clicks a radiator seems to make only when the lights are out. I rather like the language and don't mind a reference to "In unlighted corners, angles / opening to blank space,--" and, in fact, see the description as purposeful. The noises Poulin speaks of seem unusual and resonate more in the imagination because there is no other sound for them to blend in with--they resonate in those blank spaces, the knocks, squeaks and hisses in the dark resonate longer, deeper, with more texture. The makes me think of those sketchy memories of being in the house, in bed, the house entirely dark, imagining every squeak and creak and groan of the night being the passage of creatures from another realm who passed between dimensions in those hours when all were supposed to be asleep.Poulin's lyric is an adult fixation, sure, but he shows this is a habit that hasn't been entirely relinquished to adulthood.

The Angels of Radiators
by A.Poulin Jr.

Every night when my wife
and daughter are asleep
and I'm alone in this old house
lost in landscapes somewhere
between the points of stars,
my furnace fails like heaven.

The water that will turn
to steam and turn to heat
and rise as grace runs out.
In unlighted corners, angles
opening to blank space,
radiators, cold and white,
are silent and dead angels,
incarnate where they fell.
Every night, every winter,
I have to go down cellar,
turn the valve until the gauge
is full of water once again,
until the furnace starts
to rumble with its resurrection.
Then the house begins to move,
and through the winter night
that threatens us like Hell, by God,
the pure spirit of the fire roars
blue, veins ring, and radiators,
a whole chorus of Dominions, sing
and dance wild alleluias warm as spring.