The Unwritten History of Prose by T.R.Hummer is a poem sussing through a variety of ambiguities about the competing provinces of Specialist Languages. The upshot of the poem is that the the jargon of each linguistic stronghold bleeds in the common parlance in a big way, one is left wondering, if they stepped back long and far enough from the tropes one routinely uses to discuss their life and their relations, that one's self-description of being-in-the-world is far more fractured than they thought. We are a species being, of course, but the conditions of behavior and purpose are subject to tweaks andadjustments from the experts--scientists, ministers, doctors, lawyers--who act, shall we say, in a profound spirit of self-interest. Whether it's enlightened or not depends on where you had your money invested, if you had money to start with.Fitting that there is poem about prose, as a form, given the surfeit of stanzas about poetry or, more galling, poets talking about being poets. The difference is striking, and considering them, you can appreciate the reasoning poets, good ones, would consider themselves a stand in priesthood, the antenna of the race; poetry is the manifest destiny of the soul, an expansionist form that conspires, contrives , conflates the matters it chooses to deal with into a unified field theory of how the universe operates solely to make us feel a select schedule of moods. There is , perhaps, a theological assumption here, that just as there is a plan , with protocols, God intends for us to have in order to arrive, or not, at the off world point of this life--remember the phrase everything is exactly the way it ought to be in God's universe --poets treat the human experience as if were a fixed menu written in a language only they could read and order from; if crow was what they ordered, crow was what you ate.

Prose would be more concrete, pinpointed, appreciating the density of the concrete and the earthly essences that went in to making all these things adhere and form other things that are made by man; poetry is the tongue of God whispering his will into our ears, prose is the rumble and logical result following the fall from grace, a post- Babel of competing certainties , voices of conviction basing their expertise only in what can be measured, quantified, molded into a tool, a machine, a city of man made things, enterprise divorced from sacred intention, unmindful of consequences that cannot be felt until every enterprise is exhausted and each resource is depleted. Prose is the language of progress, capitalism, the rationale of moving on to the next thing , creating another catastrophe premised on unbound hubris.

I rather like this poem; it says prose is the medium with which we say "here I am, this is what I did, these are my explanations of my actions, my apologies for each and every failure." In the beginning there was the word , and in the end there will only the rubble of a civilization of things created from concepts those words delineated , and perhaps in the end there will be only the fragments of prose bits that survive, half-phrases, intriguing references and terms torn from context and historical fact, mysterious combinations of phrase that become, ironically, poetry all over again. A new Eden might yet arise, and we might yet again be a tribe collectively guessing the meaning and purpose of the sounds we make with the scraps of language set before us.Years, another poem by the intriguing T.R.Hummer, continues that poet's fascination with the promises and evasions of prose , the language of certainity in an existence that adheres to no protocols that have been spelled out, literally. We could say that the best aspect of having a written language is the poetry that results in discovering that things and events are never as they've been described and defined.

YEARS
Years ago, the story begins. Once.
In such-and-such a place, some season or other,
A stranger, two lovers, disaster.
She wants to close the book, but constellations
Of narrative structures interlock: gunfire
In the street, explosions at the embassy,
Betrayal, failure, decades of grinding hopelessness.
How long ago he died, his face pages vanished.
And she, dedicated reader, carries out sentence after sentence,
Her knowledge of the end complete, her execution certain.

The story begins and it never ends, as this tale and countless others like it are recast and retold; different actors, similar circumstances. Hummer gets ahead of the tedium that self-awareness of narrative form can create but chipping away at the didactic and getting to the good parts, the bits of unexpected circumstance that make a familiar narrative compelling, only they are not so unexpected. This poem might be a highlight reel, or someone fast-forwarding a favorite DVD for those scenes that resonates the most; the condensing of the particulars itself has an exhilarating effect. I think the last lines --


And she, dedicated reader, carries out sentence after sentence, / Her knowledge of the end complete, her execution certain -- because it suggests a pun, a reflection of the words we use to recount and recite a plot we know very well, and also something akin to a sentence one is fated to live through, to a willingly subscribed to circumvention of one's time where one's actions are plotted out in advance. 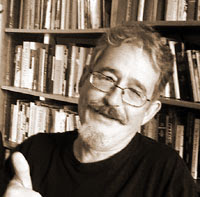 It would seem to argue that we are only at ease using our own will power when we are secure in the belief that that we're constrained by a grand narrative where outcomes are pr-emeasured and assured, despite our efforts to violate form. You are left to consider whether will power is an illusion in this instance, or if the violation of form is the disregard of the grand narrative and that we do have will power? As with the kind of ambivalence Hummer connects with for, the matter is slippery and does not rest either in or outside the distinctions; the boundaries are permeable.Will power, nee Free Will, exists indeed, and we live with the knowledge that we have the ability to go beyond implicit and tacit boundaries and create unpleasant consequences, but we chose not to. Most of us don't, in any case, and will use a sounder judgment. The majority of us wouldn't take a gun to traffic court to settle a dispute involving a ticket. This notion is something fluidly referred to as 'sanity', and there is a comfort knowing that one's fellow citizens stay within the boundaries. But there is ambivalence about those margins we stay within; there is an attraction to an existence where the Rule doesn’t apply. This seems a strong reason as to why we valorize and apologize for those artists, poets and writers we regard as artists, the usurpers of the norm. If they would otherwise be an unmannered assortment of louts.

Hummer's interest in written language as subject matter comes from the perception that human personality (in our culture at least) thrives on the notion that we're creative and groundbreaking creatures who can redefine themselves, as individuals, anytime it suits us, but that there is a virtually unspoken need to know that there are limits to how far we can stray from the script we're handed. It's knowing that we could break through the fourth wall and create all sorts of chaos for ourselves and our fellows , but that the host of us choose not too; we ascribe this to Free Choice, but for me Hummer has a darker theme, that of Fear Itself. The dread of an existence stripped of meaning, of limits, keeps us in check.

Email ThisBlogThis!Share to TwitterShare to FacebookShare to Pinterest
Labels: T.R.HUMMER