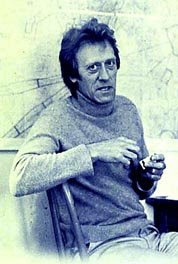 There comes the occasional need to clear the poetry that becomes waxy sediment in one's ear by returning to an old standby, a dependable set of poems that fired an imagination decades ago that can still inspire one to think imaginative writing is indeed the method with which one can "break on through." This isn't a slight against anyone I've been reading, though there are hills and dales in the endless reading list I keep; it's just that I want the gravity and grit of sentences that distinguished themselves from the common expression. So I go back to Ed Dorn, introduced to me by poet Paul Dresman in the late Seventies, particularly his epic poem "Gunslinger." Equal parts myth-making, satire, phenomenological investigation and an expansion on the Charles Olson projective project that twined style and diction, personality with the physicality and accumulated history of the region, some of what Dorn was up to now reads psychedelic and out of sync, of its time, the Sixties. Still, there remains beyond the dated lingo the verve of a writer that understands the absurdity of all manner of defining rhetoric and which finds purpose in exposing what's under the cornerstones of dogma. The warning sounds again and again in Gunslinger against someone finding themselves described at all. Set in a West of the imagination, where one can start over and start again potentially as many times as the imagination permits, being described imprisons one in another person's frameworks; you become what they think you are. The late Ed Dorn wrote a masterpiece with "Gunslinger," an anti-epic poem that prefigures many post-modern gestures from its 60s era starting point. Funny, cartoonish, erudite to the extreme, it also locates a tuned lyricism in the Western vernaculars that Dorn uses: the metaphysical aspect of our legends, the sheer questing for answers as Euro-Americans come treading closer to a West coast that will stop them and force them to settle and create lives from dust and ingenuity, comes alive in a way that never escapes the zaniness of Dorn's inquiry into the nature of the search. A masterpiece. Giddy stuff, this, but Dorn is brilliant at a stretch. He gets it done. One finds solace, too, in his shorter poems. Some are plain-spoken knockouts:

IN MY YOUTH I WAS A TIRELESS DANCER

But now I pass
graveyards in a car.
The dead lie,
unsuperstitiously,
with their feet toward me--
please forgive me for
saying the tombstones would not
fancy their faces turned from the highway.

Oh perish the thought
I was thinking in that moment
Newman Illinois
the Saturday night dance--
what a life? Would I like it again?
No. Once I returned late summer
from California thin from journeying
and the girls were not the same.
You'll say that's natural
they had been dancing all the time.

Tom Robbins' wrote a blurb for one of Dorn's books (Hello LaJolla), "Ed Dorn is a can opener in the supermarket of life." He was one of the great masters of the Western Voice in the 20th century, a voice maintaining rural accents and wanderlust that has been subdivided with Eastern conceits and European irony; his epic poem Gunslinger is something of a post-modern masterpiece after the pomp of Whitman, and Charles Olson has worn away; the student has an expansive persona as well, but it is zany, frantic, engaged in constant conversation with the variant dictions he contains within himself. Moving on to the next thing, as you say, is what is always required in this personality; there's always something else to learn, emotions to feel anew, a new dance step to absorb, a new direction to take overall. I like this because Dorn has a way of interrupting himself and getting to what he really wanted to say without the initial lines being a waste; one appreciates the mastery of the bold strokes, the odd alignments. One appreciates, as well, his relative brevity. Ed Dorn could take you on a journey in a poem and leave you at the side of the interstate in the middle of nowhere, wondering what just happened. I mean that as a compliment. If anyone cares to read it, a poem I wrote for Ed Dorn can be seen here.

By TED BURKE at March 30, 2019
Email ThisBlogThis!Share to TwitterShare to FacebookShare to Pinterest
Labels: EDWARD DORN