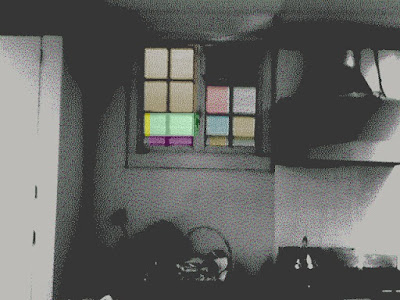 “Movement”, a poem by Wyn Cooper, is that frustrating species of a poem that starts off well enough, full of promise and intrigue, that chokes to a close. It begins as a smooth ride with effortless transitions between speeds suddenly becomes a lurching, jerking collapse. We are to make note of all the movement that occurs in this narrative, the countryside the narrator speaks of to his unknown companion. The tone is nostalgic, the recounting of annoyances fondly recalled. But time goes on, life advances from one neighborhood to another, one terrain for another completely unlike it. One moves and attempts to be quickly assimilated by something more urban, bustling, impatient, impolite, a city that the narrator doesn't want to discuss, not for long.

This is the pun contained in the title, an obvious ploy from the get-go; the irony, I suppose, would be that the weather, the relative stillness, the lack urgency in the bucolic ruins of fading America are not, in fact, cursed with inertia, as the speaker addresses the particulars with telling, nearly idealized detail. An implied sigh accompanies the pause between first and second stanza; this is the part of the conversation where the speaker is lost in thought and averts his eyes, falls into a melancholy that dares him to speak what he is not able to find words for. The poem goes from being fairly specific to vague and euphemistic. The effect is spoiled by Wyn Cooper's need, to sum up, the inchoate morass seething under the surface of these well-mannered images;

"...before we
settled in a city of other movements,
found new rhythms that suit us better,
we tell ourselves over and over. "

The poem is a nice if other unremarkable presentation of the low-level anxiety that haunts the suburbia of John Cheever, who was a master short story writer and novelist who explored a generation of the white middle class that had to distract themselves with drugs, adultery, and workaholism. The aim of those who lived in Cheever's New York's outer communities was a continual effort to dull a collective suspicion that the lifestyle and manicured neighborhoods they chose for themselves are lifeless results of preferring Bad Faith over singular authenticity. Cheever, though, was much subtler and more lyrical as he wrote of his characters attempts to fill an emptiness that will not be healed. Cooper had some more writing to do to make this idea work; the poem just quits suddenly and the screen one imagines this monologue being played against goes blank. The last sentence reveals an unwillingness to see this thing through. The poet is unsure how he wants to talk about this string of related icons.
By TED BURKE at February 21, 2019
Email ThisBlogThis!Share to TwitterShare to FacebookShare to Pinterest
Labels: WYN COOPER