SOME QUESTIONS I WAS ASKED AND THE ANSWERS I GAVE 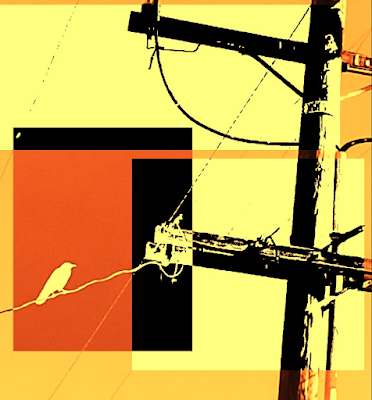 What did you discover about yourself while writing your poem?

Usually, I write to find out what comes after the sentence after the one I just wrote. I have a particular set of strategies, notions of musical phrase, cadence, rhythm, and structure I’ve developed over a good many years—and this isn’t implied that I’ve mastered this form of poetry, free, at all — and I’ve internalized these linguistic habits much as a jazz musician internalizes his training and notions of theory; I come up with a first line and consider what object, word, image, attitude it contains and try to imagine what sounds musical and rhythmic and a logical expansion on the details the first sentence contains. It’s theme and variation, improvisation of a sort in the moment of creation, seeing where the initial idea takes me, stanza to stanza, until I come to a place to a poem where it can end with a resolution (or irresolution) that satisfies me, and perhaps satisfies a reader. What I discover about myself is that there is another way to explore emotion, experience, spiritual and philosophical concepts without resorting to the mechanical language of the academy.

How can I take the line "my shadows hold the wisdom of a crow's mysterious intelligence" for a line in a poem and make it more poetic with the use of allusion and metaphor?

You can’t redeem this line, no matter how hard you might labor, not if you want to write a good poem. This is the kind of image someone new to writing poetry often writes when they’re trying to be/sound profound. Never try to sound smart, learned, philosophical in a poem: effective lines that resonate with readers on more profound concepts come from the best and most effective use of language to get across experiences and notions that are not easily conveyed through conventional prose. “No ideas but in things” is how master American poet William Carlos Williams put it. Let the object, that thing in the world that is in the situation being written about, be itself, without the flimsy abstraction. Read Williams, read TS Eliot, read H.D. and come to understand the way each is using language, and understand as well not just what they’re saying but also what they're leaving out. But trying to shoe horn a line you think is profound into a poem, a line that attempts to make a big statement, will only result in an awful poem. Be more direct, get rid of the “literary” language. And if a phrase comes too easily to you in the writing, get rid of it. Avoid the trite, the clichéd, the abstract. Have your poems come out as clear statements of experience, convincing recollections, not crowded with weak attempts at a higher language.

Does a knowledge of correct matter if you're writing poetry?

Of course, it does. There is the notion that poetry is an expressive free for wall where the rules of grammar don’t matter, and this is incorrect. Writing poetry, whether you’re a new formalist, a romantic, a practitioner of avant gard strategies, a fan of rhyming or someone ruthlessly in the camp of the free versers, is writing, a means of communicating to the reader. I'm a believer that one has to know the rules of the game before they discard them, too. A knowledge of correct grammar, of how to most cogently compose your thoughts and make them ready for the world, provides you with a working knowledge of forms, structures, gives you access to effective rhythmic devices, gives you a proper sense of how to use metaphor and simile. We all know, of course, that great jazz musicians like Charlie Parker and John Coltrane didn’t just get up on the band stand and start honking away ; their brilliant improvisations were based on profound knowledge of music theory and harmony, and based on relentless wood shedding, of practice in an effort to strengthen their skills as jazz improvisers. Their knowledge of music forms were internalized and gave them tools to compose their greatest sorties. The same goes for poetry. Every poet I’ve admired and studied—Eliot, Stevens, Shakespeare, Laux, Ginsberg, Baraka, HD—understood the fundamentals of writing and could work their way around the rules ; their writing was great, singular, and utterly fresh until now because their innovations acknowledged the traditions which had come before even as the poets broke away from them create their own work.

Free form poetry is a term used by terrible scribblers to hide the fact that they haven’t the faintest idea of what constitutes a good poem. Free form poetry will feature unrestrained expression, an excess of emotion, either show itself to be clogged up in clichés, sentimentality and bathos, or it can be utterly impenetrable in regard to any kind of readability or coherence. Many free form stanza writers will justify their cryptic, ungrammatical , spiteful, rigorously incomprehensible efforts as being “experimental” or “avant garde”: the gruel schleppers who use words like that are often eccentric, show an inability to accept advice for suggestions that might help them become better writers. Free form poetry is without craft, it is without art or any kind of creative integrity. It is the writing equivalent of puking, where all that awful, dreadful, disgusting stuff is just emptied onto the page without regard to revision.Free verse poets, the great free verse writers—Whitman, Dorianne Laux, TS Eliot, Ginsberg, WC Williams, Amiri Baraka, John Ashbery, many others—understand the fundamental techniques of writing poems, have been long time students of other great poets and have studied their methods in a variety of ways and have, in turn, mastered the techniques themselves. These are matters of rhythm, scansion, scale, the varying ways in which one uses metaphor, simile, allusion, and allegory among other facets. I could go on, but the free verse poets are real poets because though they don’t rhyme and there are shifting notions of pacing and rhythm that are obvious in their verse, there is also a clear understanding of techniques that they’ve made their own and have used to create their respective voices , the point of all that being is that its obvious there is skill , craft, and real inventive language being used to bring the reader into the poem, into the journey of ideas and feelings the well-written poem can evoke. Not every free verse poet is a great writer—as with any other art form, there are standards by which an artist is judged by reader and critics, and the simple fact of it all is that not everything is a work of genius. But it must also be said that the least of the free verse poets have at least an understanding of the craft and long history of poetry. Free formers do not, as a rule , and that’s a sad fact.

What did Charles Bukowski mean by "failure is freedom"?

It should be obvious if you’re familiar with Bukowski’s writings. As his recurring character Hank Chinasky wanted to do nothing more but play the ponies, drink, have drunk sex and sometimes write a poem, failing at something, a job, a marriage, a promise, some commitment to lead a responsible and principle life, frees you from the pressures of having to measure up and allows you to become something that isn’t scripted. Laziness, sloth, self-loathing, and inebriation were more honest things to be in this existence . You only had to be your smelly, repulsive self. If you and others have low or no expectations about you, the margin of disappointment is very low or nonexistent.

By TED BURKE at December 08, 2022
Email ThisBlogThis!Share to TwitterShare to FacebookShare to Pinterest