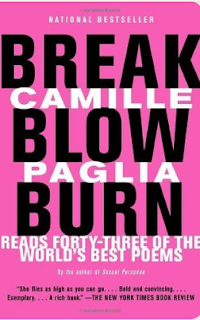 I've said some rude things about Camille Paglia when the academic-turned-public intellectual was a regular columnist at Salon.com. I was berating her for basically wasting the opportunity to be smart about cultural and political issues by lavishing each form of self flattery. To court cliché, even Norman Mailer has more modesty. I haven't changed my mind, but I should mention her 2005 collection of poetry criticism, Break,Blow,Burn. It's the liveliest collection of critical remarks I've in years. Camille Paglia published her collection of poetry essays Break, Blow, Burn (now in paperback) in 2005, and straight away there were those neoconservatives who seized upon the firebrand professor as one of their own, someone brings "reason" back to the classroom.It was hoped in some discussion groups I've recently emerged from that Paglia is Sanity itself, ready to unfasten the choke hold of incomprehension that's been around literary criticism for decades. The short version of all that conversation was that Paglia would be the celebrity academic intellectual who would sift through the Great Books and present a straying society the Values and Virtues William Bennett cherishes almost as much as he does a solid poker hand and a stall stack of chips.Hold the phone. I don't think Paglia represents "a voice of reason", since the word "reason" is the last thing you want to apply to a close reading of a poet's work. It implies, by default, rationality, and it's never been the poet's assignment to reason through experience as if he or she were a scientist trying to classify and categorize the world about them.

Rather, poets, good poets, and their work continue to attract us because the way in which they usurp the instructed ordering aspects of language and instead find ways to integrated what is seemingly inexpressible, felt experience, the "interiority" of being, with what is observed in the factual being. It's perilously hard poetry to write successfully and, even when it's done well, reviewers toward totalizing , sense-making totems that bring a reasonable and agreeable sheen of coherence to a work; the way we've come to discuss poems falls too often in the smelly troughs of conventional wisdom, received perceptions, cracker-barrel philosophy, simplistic and simple-minded platitudes, all of which are devised, by consensus or conspiracy for readers and reviewers, to have the world remain entirely comprehensible and sane.

The voice of reason is the enemy to good poetry, and that is what Camille Paglia knows better than any other commentator; a poet, she argues in Break , Blow Burn (now in paperback) is that a poet , though a conscious and determining artist, acts nonetheless as a conduit for the wild strands of personal narrative, religion, myth, comprehensible realism, rage, philosophy merge, blend, twine and twist in the same discussion. Poetry is the language of unreason, another way of taking the pulse of the culture as seen from the particular and individual poet's voice who lives within and yet is compelled to view it askew. The essays in Break Blow Burn argue that the poems under review are not required to "make sense", to deliver a singular meaning, easily digested and disposed of, but exist instead to provide a subtler, more nuanced , more complex sense of what experience entails. Many ideas from many sources come to bear on a poem's thesis, and Paglia pulls them out, addresses them, and demonstrates the fascinating dialectic of the way ideas, images, expressions and varied idioms influence one another, offer shades of inference, change meanings.

It wasn't enough that the national discussion on poetry was already pathetic and contrived, a contest between assorted second and third generation splinter groups of specialized enclaves trying to inhale what was left of the air in the tiny room where the debate raged. Amazingly, the conversation had become as dumb as it was insulated. In the 2001, the New Agers and refugees from shoe gazing concerts got into the act with the publication of Roger Housden's slim collection Ten Poems to Change Your Life, in which he presented the undefined general reader with a set of poems, varied to gender, nationality, religion, life style orientation, that they might consider between errands and cell phone chats: " The Journey" by Mary Oliver ,"Last Night as I Was Sleeping," by Antonio Machado, "Song of Myself" by Walt Whitman ,"Zero Circle" by Rumi ,"The Time Before Death" by Kabir,"Ode to My Socks" by Pablo Neruda , "Last Gods" by Galway Kinnell, "For the Anniversary of My Death" by W. S. Merwin, "Love After Love" by Derek Walcott "The Dark Night" by St. John of the Cross .

A high-quality selection, give or take exceptions according to tastes, but Housden's intent seemed less to introduce readers to the wonders and varieties of perspective poetry might offer than to bring us to the lectern where he would deliver his Message of the Day. Following each poem, there was a light discussion of the life's circumstances the preceding poet wrote about and Housden would extrapolate through a number of nimbly massaged points of literature, theology, popular spirituality, to give the imagined reader a broader perspective, a moment's respite from that crackle and insistence of contemporary consumption. The aim of the collection, hardly surprising, was to have the stressed audience abandon their cell phones, lap tops, and exercise equipment and make time to smell the roses before they were gone , trampled under the heel of progress.

It's not an original premise, but it remains sage advice all the same, and one could for the moment put their disdain for the use of a poet's work as fodder for a feel-good mill, although containing the contempt was harder than it would seem. The irony was that the fresh perspectives, the original language use, the carefully crafted evidence of subtle intelligence interrogating the problematic nature of existence was being used as another means of delivering readers to insights they already know. One hoped, even prayed, one hid under sheets of wishful thinking; any way of bringing readers to quality poets was worth a bit of pimping by an enterprising editor and motivational guru. Or was it?The problem remained that the skewed thinking that characterizes much of the best work would only confuse and further complicated the world for an audience that wanted assurances, not ironies from what they read and reflected upon. The mind was already a roiling with contradiction and discontent. Housden's editorial genius was his ability to ignore problematic subject and stir his declarations skyward, looking over the hill for the displaced Gods who formerly assured us a coherent world.

Ten Poems to Change Your Life turned into a series of five similarly named collections, a choice gathering of poets per volume, followed by Houston's compulsively upbeat chats. A gimmick has been established for Housden and was performing handsomely—the books, pocket sized, were perfect for bookstore cash register stands as impulse purchases, and in the dozens.

One despaired seeing that Housden's books sold while the poetry section remained the slowest selling in the store where one worked; the audience was ready to read one poem by Walt Whitman and absorb a slight ration of cracker barrel spiritualism as an afterward, but such readers weren't inclined to pick up Leaves of Grass and do their thinking. Housden's audience is one that wants to be told what things mean. Housden's brilliance isn't what he says about the poems but rather in recognizing an area of mild interest to big audiences that hadn't been adequately exploited and denuded of any possibility of inspiring even a minor itch.

It was enough to make one wants to give up the game entirely and watch DVD reissues instead, but there is a blast of fresh air coming through the room, Camille Paglia's Break , Blow, Burn, a collection of forty-three poems brought together for a close reading by the author. Paglia is a humanities professor at University of the Arts in Philadelphia, and made her entrance on the national stage with the publication of her bulging, bombastic and usually brilliant book Sexual Personae, a sprawling study of sexual identity, its profound effect on art and culture, and the endless way that it's been disguised and altered. Personae was maddening in all its phases and investigations, with theories and declarations worthy of full dissertations popping up every few pages, yet no matter how one read her breathless , in-your-face explications that every proverbial pore of existence, society, and culture was dripped with sexuality (repressed or blatant), you couldn't dismiss with the usual brush-off .

Paglia's basic thesis about the best way to appreciate poems is to stop worshiping reputations and the sordid prestige that comes and begin instead to read and think about particular poems. Hers isn't a sensibility to bow to fashion or some one's deeply intoned name; fame and a gimmick will not acquaint the poet under review any slack. As she says in the preface, what she believes in are great poems, of themselves, separate from larger bodies of work. What we get in the forty-one essays in Break, Blow, Burn are her intense, close readings of what she regards as the best poems in English; the selection and the arrangement of what these "best" poems come to be won't satisfy every taste or notion of what honestly comprises the best work, but Paglia didn't write these missives to cosign every lazy idea we've had about poets and their work.These are her favorites, using her criteria, and quite unlike many skimpy or corpulent collections slapped between covers to satisfy a fleeting fashion, she will lay her arguments in solid, comprehensible and far-flung terms, returning again, again and yet again to the respective poems she's reviewing. Less a medium to make us feel warm and secure, her poems have to do with an extreme engagement with life on life's terms. Whether finding whole worlds of secular metaphysics contained in the few lines of Wallace Stevens' "Anecdote of a Jar," sweetly limning the edgy and cavalierly erotic voyeurism of Paul Blackburn's "The Once Over" or marveling at the triple tiered city speak of Frank O'Hara's fantasy "A Mexican Guitar," Paglia discusses each of the poet's work as points in which spiritual certainty and intellectual pragmatism come into conflict, war with one another, and emerge by poem's conclusion with some third perception larger than the opposing inclinations which reveal a finer, more complex, less fixed situation for the human condition. In each case, Paglia follows the poet in the process of bringing together the poem, their process of perception, beginning with what was observed, the associations the image conjures or suggests, and delicately observing how the poet controls their associations, no less careful than a great composer, giving play to the various senses and associations each phrase and delicious reference appeals to.Paglia's genius , if that's it to be called, is her ability to recreate the poet's thinking at the moment of composition. This makes her discussions intimate, vital, a whirlwind of excited speculation.

Flux, change, destruction, growth, all the things that make the up the endlessly repeated cycles of death and birth, are what connect these poems, and Paglia , in these vividly studied pieces, isn't about to let any of us slide by with only a nodding acquaintance with what a poem can mean as well as be. Her view of art is that it increases our awareness of life's enormity, not reduces it to some meager paragraphs of ego massage, and it's a good thing that she was willing to put her notoriety on the line in introducing some rigor into the general chat. Finally, what is especially inspiring in Paglia's fierce arguments is her refusal to grant the readers slack. None of this material is over your head, she seems to insist, Get on the ladder and see what's out there.

By TED BURKE at November 19, 2022
Email ThisBlogThis!Share to TwitterShare to FacebookShare to Pinterest
Labels: CAMILLE PAGLIA