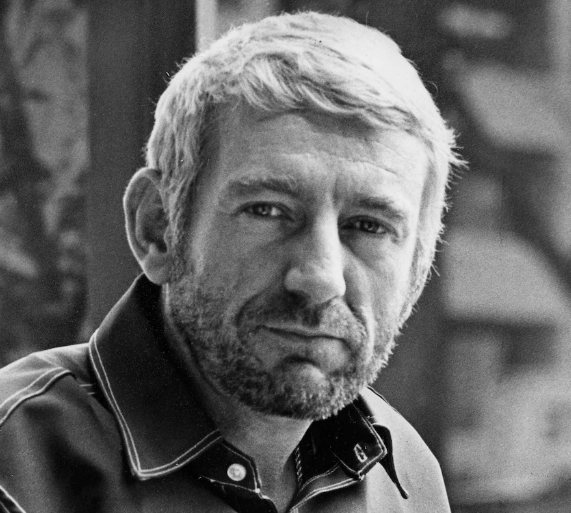 It's been famously remarked that writer Rod McKuen was "America's  most understood poet". It was a smug bit of left-handed complimenting, a crack appearing to underscore the rosier, more banal, more hypnotically obvious this man's verse was. The proper poets, academics, and critics of the era, the 70s, considered what McKuen as worse than fresh spit. The irony, you'd think, was that he cried all the way to the bank, as he was among the best-selling living authors in history. Rod M. became quite a one-man industry, with books, records, greeting cards, calendars, movie scores, long sell out tours on a global scale. Who was laughing last? Barry Alfonso's 2019 biography of the writer, A Voice from the Warm: The Life of Rod McKuen,  spent a good amount of time researching the many claims the poet made about his life and finds a personality more complex and melancholic than  one might suspect. Slate, the online culture and news magazine, additionally published an article asking why is it that we, collectively, do remember or at least mention a man who was, at one time, the most popular writer in the world. It's not that I've come to love McKuen's poetry more than I had, but this attention has made me consider the influence the bard has had on my growing desire to be a writer of some measure.

It's worth sharing, I think, that McKuen was a gateway to a larger lifelong experience with poetry; he was a primary influence in motivating me to write and eventually publish my poems over the last several decades. My early influences were a mixed bag of styles, beginning with Dylan's bucolic surrealism, up to Eliot's fractured, despairing modernism, Ginsberg, of course, and critically, McKuen's solipsistic romanticism.

I was fifteen or sixteen, a choice age to get obsessed with feeling unique alone in the world, and McKuen was the poet I related to most because his persona was more cinematic than poetic. Even then, I imagined this character after hours, walking the waterfront in a thick fog, harbor lights and neon signs of seedy bars blurry through the dark gray patina, Bogart as Marlow or the Continental Op mulling over the day's events and a life of failed love affairs. It was an image of the man alone, carrying an emotional weight that would seemingly crush others of lesser depth of character.  I wrote especially awful and clumsy imitations and unintentional parodies of the poets and lyricists I admired and composed a good amount of broken line stanzas trying to assume the voice of a man who, like, McKuen, spoke from a position of long life and experience. The problem was obvious because I was in my mid-teens, had no real experience and, though McKuen's accounts of his life were fictional, lacked that poet's richness of imagination. But I continued writing, discovering more poets, a rich blend of modernists, classic voices, international voices, and learned one line at a time how to compose a poem rather than merely express feelings, real or imagined.

McKuen was sincere in his quest to get at those things he needed to clarify for himself. Still, I am convinced that he became a salesperson as much as an artist (in a sense) over time, standing for Rod McKuen Inc. Over the decades, I poked my nose into the unending stream of books he produced with stunning regularity and concluded that he had stopped any honest writing years ago and was composing verse he knew his audience wanted. He was writing for the marketplace, whether he was aware of it or not. But while McKuen can be listed as a trader in the mawkish, the trite, the bathos-ridden, one cannot with ease point toward a commonly agreed-upon example as to what constitutes a clear and substantial alternative in the quality field. Billy Collins and the wonderful Dorianne Laux come easily to mind. However, both skilled with accessible senses of language and the added sense of writing about what's recognizable in one's life and helping a reader through a series of beliefs where their world is more extraordinary than it was before. Their likes are rare, too rare, though, in the field of poets with followings--the notion of quality poets is an idea that is a muddy pond. While I enjoy a good many "difficult poets," I have to say that mine is the situation shared with academics and the self-appointed readership elite I've already mentioned; I know the critical language, I know the theories, I know the standards of consideration. It's a trap that one cannot see they're falling into which bedevils Modern Art across the board, in writing, visual art, what have you:  you cannot "see" (or "get") unless you "know" the theory and the historical forces that have brewed and seduced each other to make that theory possible.

Knowing the rap about an art that is, by definition, supposed to deal with hard-to-express beliefs is more important than either the art and, most tragically, the human life is supposed to augment and bring quality to. In this regard, McKuen wins the argument about the value of his work; he was awful as a poet, but the alternative was smug and something of a private club that few in our population found worth the bother to apply for membership in.

By TED BURKE at October 21, 2022
Email ThisBlogThis!Share to TwitterShare to FacebookShare to Pinterest
Labels: ROD McKUEN