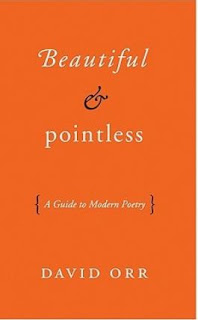 David Orr is a smart writer and poet who has taken on the task to add yet another apology regarding poetry and its under the radar status with most readers, yet another attempt to make the craft less off-putting to a larger audience. It is an enjoyable book , but the joining of poet and readership is not something that can be accomplished by easy suggestions ; as usual, I adhere to the pragmatist dictum that the value of any theory is in how it works, which means, to paraphrase, the allure of any poem, in any style, of any theory, of any agenda composed in English, resides mostly with the talent of the individual poet.

We get into matters about how well the poet has absorbed and assimilated their readings, ie, "made them his/her own", how broadly they've outgrown their influences and progressed toward their own version of originality and genius, of course. At the end of the day and long into the night and the following morning, what draws a reader to a poet again after a first reading was the quality of the stanzas, the line breaks, the stylization of the verbs and the spare placement of the adjectives, the use of imagery that seemed both unique and yet plausible, the use of metaphor that is delivered smoothly, invisibly, musically. It is, I think, less a matter on whether a poet opts for simpler diction and terse couplets in regimented rhyme schemes, or a shambling flow that winds through so many associative canyon highways before coming to something resembling a poetic effect; poets are not unlike jazz improvisers of the language, which is to say that how ever they choose to address a problem they've assigned themselves, it comes down to if the writer has developed as style that has an elegance that adheres to and extends the dictates of their chosen form, if the poems in question have their activity placed in the world the poet is nominally apart of, and if this is accomplished with the least amount of pretentious self-awareness.

This is to say that what makes a poem an attractive item to return to again and to ruminate about depends on the skill the poet can forget the prevailing nonsense that "poems are always read in the context of other poems" and get on with their task of fathoming more interesting mysteries, oddities, paradoxes and alluvial epiphanies the experience of being alive, breathing and seeing brings us. There is nothing wrong with living in your head, per se, but even poets need to stop watching the dust gather on the furniture and go for a walk, a drive, a movie, a date.

By TED BURKE at October 25, 2020
Email ThisBlogThis!Share to TwitterShare to FacebookShare to Pinterest
Labels: DAVID ORR