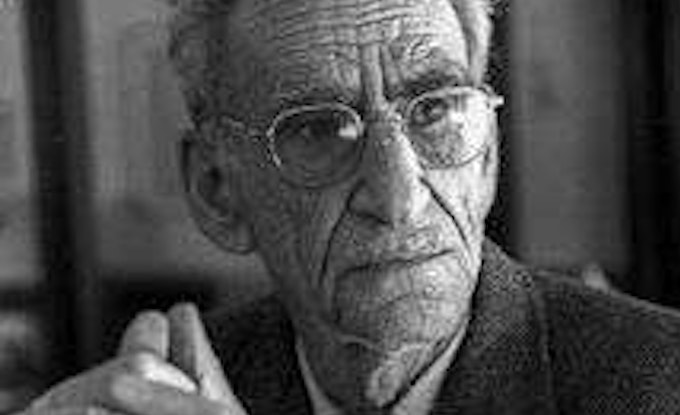 We’ve been reading Michael Davidson’s superb anthology of George Oppen’s verse, Collected Poems, forcing me to the keyboard to ponder some connection with Wallace Stevens . with whom he shares an obsession with how the human personality tries to speak to those things that will never let themselves be revealed.The massive solitude in Oppen's work, wholly devoid of Romantic despair, seems an intrinsic part of his recognition that the Earth itself can never be known.Oppen is connected to Wallace Stevens, I think, in that there is awareness that language has the habit of taking on the personality and delusions of the speaker and thus disguises nature, "reality" under layers of wordy assumptions that miss the mark of the mystery of experience. Stevens, though, exults in his search and wonder, and views the finalizing that eludes him as occasion for joy, wonder, a reason to intensify one's attention on the very nature of being in the world; Stevens thinks it enough for the witness to be staggered by the realization that existence is absent of final, metaphysically fixed perimeters, and that one should relish the more profound miracles in the details of their own senses.

Oppen comes to know his loneliness, and there is in his work some longing for old myths that gave comfort to a restless mind. Oppen, though, denies the lure of nostalgia and presses forward on some path that has an end only beyond his own death, that language will be restored to it's ability to correctly assess the world and ourselves in it, and avail us with some ideas of assembling a world that operates on good acts and deeds and not a high rhetoric that amounts to sighing, whimpering and casual bad faith, in Oppen's estimation.
I'd be interested to hear your ideas regarding Oppen's path that leads beyond his own death, as that seems alien to his poetry, at least as far as it refers to poetry.A bad habit of mine is to use dramatic language when I'm the full boil of writing, so forgive me for possible vagueness and overstatement.I am thinking , of course, of Oppen's leftist politics and his association with what's come to be called the Objectivist movement, spearheaded by Louis Bukowski, and whose members, as such, included Charles Reznikoff, Carl Rakosi, with older American modernists such as W.C. Williams and Pound having close affiliations with this loosely defined group of writers.In the broadest sense, Objectivist writers, following Zukofsky's lead, developed styles that evolved from Imagism, but sought to come up with a kind of unblinkered epic poetry that wasn't hampered the symbolic obscurantism. The idea was to write, according the poet's personality, a verse that presents concrete things and realities not for the purpose of making them mere props for some metaphorical system whose results wind up with dead tropes and forgone conclusions that reaffirm only bad faith, but rather gloried in those things and their uniqueness.
Zukofsky, along with Charles Olson, sought to expand the aesthetic into the social areas, the geographical, into areas the names of which define us in relation to nature and the world humans build within it. Where a modernist like Pound (as opposed to Stevens) sought to legitimize the poet as an insurmountable authority on the exactness of nature and meaning and hence establishing him or her as an arbiter of Power, Oppen's wanted to use his poetics to make the discerning habit of mind, the ability to use language in unsentimental ways, to the general population. This would have been his ultimate gift of love, and there is a tone in his writing that I get, sometimes, that he is aware that such revolutions are started in one's lifetime but often not finished. I've no doubt that he wished that what started as a preferred compositional practice would grow into a self-renewing alignment of the population's right-sized perception of itself within Nature. Some of that loneliness might as a result abate. Zukofsky, Oppen and the work of the Objectivist Poets, as such, are a huge influence on the work of the L=A=N=G=U=A=G=E Poets, whose ranks include that charged inversions,reversals and redirected practice of Ron Silliman, Rae Armentrout, Bob Perelman, and Michael Davidson himself. It's a stretch to refer to these poets as a school or movement at all, which is why I preface the remark with the tired qualifier "In the broadest sense...."
These poets come at time when the American modernists were getting older and their ideas had been assimilated by a younger generation. The poets share some similar attitudes regarding poetic language and the quest for unassailable truth, but calling them a coherent movement is a stretch, as you say; literary critics, needing to classify styles and writers, pounced on "Objectivism" as a the term to use, and in fact wrote the manifesto, in the form of their varied systematized remarks, that Zukofsky et al never got around to composing. The poets were off into the American wilderness, distinct in style, attack, voice. Oppen's attraction to the general attitude with the Objectivists, to compose a phonologically responsible poetry, is understandable, but his personality and his style are his own, after the association. It might also be said that Oppen's poetry is the best of this generation of writers
L=A=N=G=U=A=G=E poetry, unlike what's been called Objectivistism, was an actual poetry movement, replete with manifestos, several anthologies, and an intimidating backlog of criticism and commentary by the poets themselves addressing what are conspicuously shared ideas and aims, stated succinctly as this: the theme of Language poetry is language.It was an inevitable development, I'd guess, coming out of the Sixties new left affiliations, and riding in along the tide of structuralist -inspired art where making a consume aware of the art's own mechanisms and intentions, was a common card to play; along with the writings of Ron Sukenic, Barthelme, and the films of Godard and Snow, Language Poets seemed to think that exposing the mechanics of syntax and grammar would make readers aware of how they're being manipulated.
Not a bad idea, perhaps, but it's something that expressed whatever was interesting it had rather quickly. Lately, it seems more a strong addition to a poet's resume so they can acquire an academic position. Not surprisingly, there are younger student poets who've been seduced into this style, and one prays they move from the semi-Marxist psycholinguistic braying of that peculiar school and find their own voice, through which they can trust the authority of their senses
By TED BURKE at April 07, 2020