You must read PAUL BLACKBURN 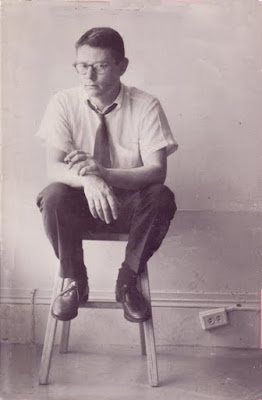 The late poet Paul Blackburn reads at times like a writer who could watch himself in action; he seems enthralled by what is said and the consequences that follow .A good bit of his writing grasps the contradictions of seduction and lust on the male psyche more effectively than most contemporary authors can handle. He didn't, for one, thing , attempt to atone for his lack of basic virtue; the appeal for me is that he isolates the hang up, and arranges the tension as a witnessing of a rationalization that rings tinny, even false. He catches himself in his own lie. In an especially good discussion of his poem "The Once Over" in her book Break, Blow Burn, Camille Paglia , for once not parading her own arrogance, gives an excellent analysis on Blackburn's skill in precisely evoking the Summary Gaze that judges women (or men) as potential sexual partners as they pass by one's view; a predatory behavior that gives into lust, with a guilty pall hanging over the nearly as soon as it passes.

Blackburn can turn these cruel bits of revelry into hard, sharp lyrics, the theme, perhaps, being a man who desires the right things to do and the decent person to be who , nonetheless, is driven at odd hours by a leering intent. It is painfully masculine and heterosexual and contradictory in confounding ways, but it is something beautifully, honestly expressed. Like Mailer's obsession with the experience and meaning of male experience, the result is literary art. I might find it unnerving at a moral level, but I suspect I'd be a less interesting had I not discovered Mailer or Blackburn.Ambivalence is the word for this poem, really, and it's not dated at all, considering that men and women continue to be complicated creatures who continue test given scenarios of gender-interaction and continue, as often as not, to end up with problematic results. Blackburn traces his own thinking on this encounter, attempting to enter into the mind of the woman who is with him, trying to disguise his hubris under some thinly offered assurances of gallantry and caring physicality--the male seems to be offering up some sort of Lawerence/Mellors version of Reichian sex technique the would bring both of them into some heightened awareness and effect a profound change in both of them. Blackburn, though, is too good a poet to take the ideology at face value and recognizes the delusional aspect of addressing a dis-satisfying experience in wholesome, all inclusive terms; depression sets in ,inevitably, and one is left with little else but to self-loathe, rationalize and second guess motives. The real world is what we start with here, setting the scene Blackburn's poem One Night Stand: An Approach to the Bridge gets even closer to the baser facts of someone who cannot relate to women without a poeticized rationalization to fuel his intentions.

Migod, a picture window,
both of us sitting there
on the too-narrow couch
variously unclothed
watching sky lighten over the city.

This is a quizzical stew of conflict that Blackburn's brooding male attempts to reconstruct the event, his motives, the second-guessed emotions of the unnamed woman. In the replay he minimizes her protests with assurances that the two of them would merge into one another and become one through the coupling. Fine, one would think, if one were in a tightly wound narrative where actions and larger consequences played out against a universe concretely, if discretely determined dramatic principles, but this is scene, for all the male's diffuse philosophizing, is composed of actions, not theories, and the awareness that one has entered into intimacy with improvised passion looms again. One is brought back to the world from which they started, depressed somewhat from the reveries. The world intrudes again, as it always will on the fantasies of otherwise sane people":

The coffee does not warm
there is an orange sun in the river
there are blue lights on the bridge
Animal tenderness and
sadness is all we salvage, is
all the picture window
mirrors and maintains.

T
his is a brave poem, an unblinking study of one's less-savory motivations and the mental convolutions one would employ to escape the guilt of behaving badly, perhaps criminally. Told sparely, concisely, with a wonderful grasp of how to join a finely honed image and a swift bit of lyric intellection , I enjoy the poem for it's honesty and lack of self pity. The detours Blackburn makes around the verbal equivocations one expects a poet to make use o is refreshing and a large part of why the poem packs the punch it does. There does exist  the wrong headed idea that stalling and expanse are the keys to ensure the impression the writer has sussed through his issues, topical and submerged, for a considered period and comes up, through naked honesty edified by craft, a poem of deep feeling. Poets with decades of favorable from critics who's praise influences the bequeathing of cash rewards do this more often than anyone , it seems, desires to be honest enough to admit. Blackburn here has a poem that casts you into a stammering response, a reaction actually, something akin, it seems, to being caught staring at an attractive too long and having to admit the conflicting tensions of lust and public courtesy. It's a hard jolt, a slap in the face, a pitcher of ice water poured over the head. It's a shock to the system that cannot be ignored , although, realistically, it can be rationalized away after the fact, minimized and justified with the reams of self-vindicating articulation the smartest and eloquent among us have practiced in the bleaker corners of our interior lives. One feels that Blackburn is telling secrets out of turn, revealing those things that is understand in the comfort of other males lusting after the objectified image  of a woman. He seems to be confessing why it is poets in particular read so beautifully on the issues of love, intimacy, great and abounding empathy for human suffering  and who themselves wind up being such emotionally neutral sorts in their waking lives and relationships. It is a brave poem indeed, one that reads as if it's goal is to destroy the disguise that being a poet provides the prowling author of superficially nuanced verse.
The Electronic Poetry Center (EPC), an online resource for information and works of major contemporary American poets based at Suny at Buffalo NY, has gone live with a page for Paul Blackburn. He was an amazing poet who could parse the spoken idiom and make it sing with a unique tone and personality better than any poet since W.C.Williams, and he could insert the most subtle of philosophical paradox and shifting viewpoints with writing that seemed off hand,an effortless expression.The seeming ease of line indicates the attuned ear, the steady pen, the economy of a master who could arrange his blocks of language, position the line breaks, compose the length of the line to a rhythmic sense that doesn't escape you as you read his work. If there was anyone who understood and achieved great effects of Williams' theory of the variable foot, Blackburn was that poet. There was always an electric current in his best poems, the thrill of the mind racing while the body is charged with energy, excitement.

Definition
Long ago and far away
and the swimmer
heading out into the bay
arm lift, plunge down, the head turning;
my heart you may swim forever
out. Look,
there is the horizon
Sea and sky meet, change; why
are we not this real intensity forever?
surrounded and known.
The world else is brown and calculated.
There on the beach, the
woman watches.
Between her legs the dog sits,
wiggling, wanting to go
too. It is a kind of death watching him swim out,
away from her, his head getting smaller and smaller, flash
of arm in sun, down,
distant churn of water between the small waves. She
holds the dog's two haunches in her hands.
He is hardly to be restrained, and love
is manifest, is felt from the two of them
differently.
The swimmer is himself.

There was a large world his eyes beheld, and he had the skill to get his perceptions in tuned with a personality framed the ironies and contradictory impulses in that odd space our language skills that allows us to hover over our own views, ambivalence and ambiguity. Not that Blackburn himself was distanced from his subjects; rather, his poems, his finest work, integrated his ideas with the terrains and the personalities within them. Please go to the page and read the wonderful poem above with the line breaks intact. Click also on well on the links for splendid Blackburn commentaries by Jerome Rothenberg, Robert Creeley, Robert Kelly among several other notable poets and commentators.

By TED BURKE at November 02, 2019
Email ThisBlogThis!Share to TwitterShare to FacebookShare to Pinterest
Labels: PAUL BLACKBURN