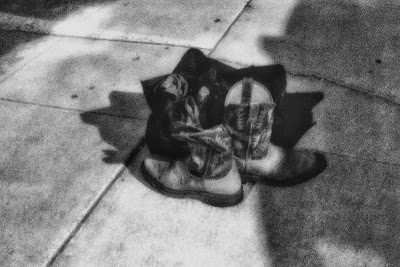 A poem by Mary Baine Campbell ,recently posted on the web by Slate's poetry Robert Pinsky ,has elicited some vigorous responses, with my words mingling with the various choruses. Pinsky has a preference for the less obvious poems, offering instead pieces that cause no end of head scratching. Half the time I think the selections are self-indulgent gruel that are a subspecies of fraud, and the other half  I defend said selections because they hit me as a unique view of a situation, an interesting vision, let us say, wedded with a style that matches the ambition and quirky desire of the writer to say something different about experience.  Campbell's poem is that rarest of things I come across, a poem I am curiously ambivalent about.
This seems to be another soul who cannot get out of Plato's Cave, except that this nameless one must have done especially offensive to warrant being gripped in a vise rather than merely chained to the wall of the cavern. But it seems the same old punishments, the same tortures and teases, all those fleeting signifiers in front of him (or her), forcing all the senses onto to one set of appearances (and appearances only) so that they have to construct an idea of the world outside the cave, free of the vise, a faith, so to speak, that this vise that holds the head is exactly where it should be, doing what it must do to whom it is doing it in the framework of an infinitely larger universe , multiverse, omniverse, what have you, that is unseen.
Or it might be something else entirely, such as description of being dead, with the world burning and eroding and washing away with the monsoon
as described. This may well be a poem of a great journey that starts at death and ends when a soul has reached the other side, a particular culture's conception of an afterlife. The wind , from which the head cannot shield itself from, blows over the face and whisks along whatever has turned to dust back into the unmade earth.
But to be honest I haven't the foggiest what Campbell is getting at here, other than to describe the quality of being dust in the wind, but this is plainly too obscure and mannered for me to even care. It used to be that I thought it was cool to be mysterious and cool and utterly and completely baffling with my writing, but hey, I was fifteen at the time and reading too much Dylan and Jim Morrison and the cursed share of Kerouac, and it took me years to learn to stop being abstruse by design and instead become interesting by intent. That might have happened when I finally got something to write about, some comprehensible subject matter , which I managed to link up with a credible language, a combination that created whatever mystery I sought. The abstract quality is a result of writing well about something, not writing  syntactically challenged pieces in a mistaken notion of what cubist writing might sound and read like.
Campbell's poem is well structured, the language clean, spare, exacting to the the objects and their qualities, but this is just too much to put together beyond saying that it seems to be out funerals, death, and the perspective of the deceased once they've left this life, observant yet powerless to intervene in the affairs of the living .

There is that odd mix of regret and acceptance that mingles in the images. There's a feeling of loss that pervades the stanzas, and a feeling of powerlessness that there is nothing one can do with what is slipping from their grasp, whether youth or life itself.
There exists here a tangible feeling that the narrator is in some fixed place of observation, taking it all in, motionless and unable to speak or intercede on behalf of the world; I took this too mean that the speaker had died and was in some astral place , perhaps from a cloud, maybe from a closet as a ghost as yet unseen, because the imagery Campbell have a museum quality, implying gold ornamentation, fruits, things one employ in cryptic funeral preparations from an unspecified time.
I'd read Norman Mailer's quizzical and enthralling Egyptian novel Ancient Evenings which deals quite a bit with the cult of the dead, Reincarnation, and has a good amount of description of funeral preparation, all of which this poem brought to mind. But I do see the other side, the observations of one getting older who is so much wiser and suffers the eventual regrets of bad decisions, missed opportunities, consequential expressions of arrogance and pride that cannot be undone, and how all this comes to the eventual acceptance that everything in our view is somehow as it must be in the larger pattern we can only faintly imagine.
I don't want to say that this is a bad poem, since I keep re-reading it to puzzle it out a bit more. Unless it's from the pen of the insanely over rated and over cited--Kerouac, Neruda, Bukowski, insert you own pet peeve here-- a bad poem does not stay long in my thinking, and it is the easiest thing to pass on, like beer. Life is too short to deal with wooden, cryptic, stick-in-the mud language. Campbell's work has it's attractions, and I would say her minimalism succeeds to the degree that The Vise gets more than one going over.Death, though, seems to be the operative idea here--as you say, and to paraphrase crudely, life may be good and pleasantly cushioned for our narrator, but there is a defeated tone to the words, a sense that one's comfort is also one's manacle around the neck. Maybe it's the sense of defeat that puts me off about this--I am of the notion that one shouldn't require anything of a poet other than to be interesting and their work to be nothing other than good, ie, worth reading--but the lack of rage here is vaguely troubling:

It is not
That the world is unkind.
Kind hands once touched
My lips and eyes
To say whatever such
Touches say.
And every day
A spoon, laden


With softer gold
Of honey
Spilling
Forces me

I would want more of a rage against the stasis, the sterility of the apparent perfection of this flesh and blood life; I would read the above lines as being something of a junkie's reverie as he nods into whatever oblivion he seeks through the needle and the spoon. Every care and dread is dissolved as a slowly corrosive bliss over takes the
body and the spirit that attends to it. But this may be exactly what Campbell sought to get across in her tightly sealed stanzas, that being alive is filled with it's own kind of death, our material and mental blockades to the world, save for a noise, a chime of a phone, a flash of light in the sky at dusk that reminds us of the churnings outside the body and it's republics of dulled sensation:

From all directions
Lightning tells us


What is lost
Or burnt
In the collapsing
World.

The nod produces its own ceremonial Edens from which the glance of
old archetypes, readings from the nursery or a junior college text book are conflated in a shifting illusion that replaces the substance of one's history, objectified into notions of the weather taking a personal care
of the layabout's bedding:

Tonight, a monsoon.
The diamond-fall of rain


Bruises my face
Washes honey
From it, and
All else.

This is all that can be seen, that can be comprehended through the suggested splendor or comfort the narrator cryptically speaks from,
and so the poem may be ironic in that we have veiled comments emanating from what are already a veiled , not the least blindered
sense of reality, and what is maddening for me is the acceptance that
the speaker suggests as to what their situation is, hazy as it is. Although there is a chance that Campbell intended our subject to be alive as they recited their spare vistas, it suggests a ritualized death all the same, a ceremony of surrender:

But in the vise
I can still stare --


Through brilliant
Obliterations of storm --
At what is
Still there.