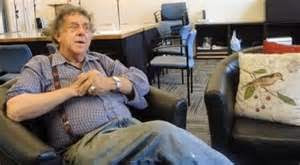 Wednesday was April 1st, known to us all as April Fools Day. It's the same day that commences the start of National Poetry Month, a four-week span selected because of the famous T.S.Eliot line from "The Waste Land" that "...April is the cruelest month..." Thursday, April 2nd was the day Steve Kowit, a great poet, a genuinely principled moralist, a quick-witted spirit of irrepressible good humor and no one's fool by any means, died. The irony of how a day dedicated to practical jokes, a commemorative poetry month selected for a line written by a reactionary, racist, dour by nonetheless brilliant poet, and the passing of one of the most jubilant poets and exuberant personalities collided the way they did is inescapable, I suppose. But rather than inspecting and interpreting too closely, I think it better, more appropriate, more helpful to remember Steve Kowit as a man of many gifts, interests, passions, commitments from his own work. He superbly fused the vernacular of street rhythm with the careful and tunefully off-center ear of a jazz improviser. The images and observations he could write were often The Sound of Surprise, to use music critic Whitney Ballett's description of an improvisation that steps beyond the chord changes and achieves absolute, in-the-moment inspiration. Steve's best work had the same effect, the "wow" factor. His genius as a teacher combined that rarest thing, honest and helpful criticism intended to make a poet a better writer. As a writer, he was loquacious who favored long lines, unexpected examples of what he was talking, odd turns of thought and colorful phrase-making and high octane similes; for all is the love of chatter, though, there was cultivation, a genius for getting to the point in the seemingly effortless rhythm of a musician as he ad-libbed fine musical phrases and elegant filigrees over either the most accelerated or most relaxed of tempos. He made what he did sound simple, easy to do, but as any with a love of music and perhaps has even achieved a level of fluidity on an instrument, the aspect of effortlessness comes with practice, practice, practice. To that end, Steve was always practicing his craft, poetry, constantly honing his chops. I had always thought of Steve's poems as perhaps the best example of someone achieving the effect of someone musing out loud, thinking out loud, taking a topic sentence, a chance remark about something he had seen, heard, caught, and taking us through the dancing and delicately spun perorations of his thought as he came finally to rest, halt, at that place where there is a pause and Steve takes a deep breath and reveals how his experience of the world was altered by the event, the conversation, the book, the thing he heard or saw and thought remarkable.

And remark he did, and for me, he was the most intimate of poets, a writer for whom someone is being addressed, spoken to, confided in.  Even if it was merely a matter of  Steve loving the sound of his own writing being resounded with the city cadences of his speaking voice, there was still the feeling that he was someone talking to you from across the table or leaning in closer to add an insight or a joke or some confidence that were for your ears alone. But for all the seeming effortlessness of making it seem as though he was talking seamlessly and without boundaries, off the cuff and unbound, Steve's writing did not, in large part, drift or wander lost in abstraction or confused association. In his workshops and the countless readings he'd given and in personal conversation, Steve talked about craft, rewriting, honing each poem until it was the most perfect expression it could be. Steve was constantly rewriting lyrics and would often introduce his poems as ones he'd been working on for months, even years. All this sounded incredible to me, a poet who was habitually writing fast and perhaps doing some minor tweaking; at first glance, all that revising seemed contrary to spontaneous expression. Later, I realize why so many poems are so good. That feeling of effortlessness in his poems was the result of hard work. Steve loved poetry too much to put his least worthy efforts into the public conversation.

Steve was a grand champion of other poets. He had an unfailing interest in others. He was the man we needed to have around when others spoke in code, euphemism, and fuzzy equivocation. Steve told his mind and cut to the chase. He expressed his own truth, as the saying goes these days. After a pause, the conversation would begin again, invigorated by Steve's skill at pulling the covers off those things --racism, exploitation, sexual inequality, militarism--that were obscured by babble and can. He taught his students to read a great variety of poets, learn a great many techniques honed by tradition, expand their notion of what poems can speak to, and find within the styles assimilated. The techniques mastered one's own voice as a writer who may tackle the subject with wit, originality, honesty, and great beauty.


One could, of course, argue with Steve about his passionate arguments against deliberately difficult poems and what he considered the worst habits of late literary modernism--I adore my Eliot, cherish my Ashbery,  I am invigorated by the rigor of Silliman, Armantrout, and Perelman-- but Steve made his case with the same sort of lyricism he brought to his poems. It was a matter of course with Steve that he felt that beauty was the expression of experience in ways that did not obscure the event and the memory; neither theory nor sentimentality would interfere with the sweet language he used to present the travails and noise and significant and minor frustrations of existence. Steve's best writing, which was prodigious, was about love, justice, lust, philosophical ironies that reduced, for the moment, the insurmountable hackery of what life in the city throws at you. Clarity of expression was Steve Kowit's genius--as wild as his poems became, as beautifully strung out as they could get on a metaphor or a pile-up of "then-what-happened?" that had the makings of a wildly hirsute shaggy dog story, Steve was in control of his instrument. He hated obscurantism and overly literary self-referencing and insisted that poetry is about the writer's engagement with the world they lived in, worked in, made love in, laughed and cried in, and not be a receptacle of meditations on its own form. In conversation with him when I attended a workshop he conducted at San Diego State in the early eighties, I recall saying that he wasn't opposed to abstraction in poetry altogether, but that he opposed to the sort of writing that lay there, thick and more or less dormant, daring the reader to make sense of tangled syntax, private jokes and artlessly inserted intrusions from areas that offer more murk, not clarity. Poems either created the passion within the reader to think harder and deeper into the experience of their lives, or the poets failed in their Poetry was about the ear, not the footnote, not the endnote. Poets needed to be in the world perfecting their craft, not in the study writing obscurities shared with only other obscure poets. Steve Kowit seemed like a force of nature, and even now, it's difficult to imagine a world without him.

I can still hear his voice each time we meet. I can still see him smiling, leaning in close, asking me if I was still "dry," even twenty-five years since my last drink. I can still hear him telling me to proofread my poems and prose better. I can still remember him telling me to put a volume of my own work together and send stuff out to the publishers for the love of God. Life is rewarded by the energy one puts into it. "Live" is a verb, after all, and Steve's message to anyone was to for those of us with things they want to do to get out there and live a little, take a stand, start a love affair, write a poem for your parents, get a job you actually like. Good things come if you work for them.  My glancing friendship with Steve Kowit was one of my best years as a San Diego poet.
By TED BURKE at March 11, 2019
Email ThisBlogThis!Share to TwitterShare to FacebookShare to Pinterest
Labels: STEVE KOWIT